Hector Campbell : Much of your work is heavily research-based, and to prepare for your latest solo exhibition ‘From the same source I have not taken’ at Yamamoto Keiko Rochaix (April 2018) you spoke to members of various spiritual, religious and psychedelic groups. How do you use research to develop the conceptual idea that support your artworks?

Byzantia Harlow : I have a long-term personal interest in alternative societies, groups exploring the spiritual/supernatural and healing practices. For ‘From the same source I have not taken’ I spoke to people from various groups – including current / ex members of what some refer to as ‘cults’. I experienced and continue to experience the recruitment efforts of some of these groups. This embedding myself within a context is how I have always worked as an artist. I suppose like any artist I make work about subjects that interest me but perhaps I immerse myself within those worlds more than some. I think this is because I am interested in creating forms of communion.

The inherent processes I explore are; repetition, replication, diffusion, distortion, transcription and transubstantiation. There’s an emphasis on re-enactments of a genuine encounters laced with fictitious elements. Centering on interchanges between true experience and embellished recollection, I am interested in the gap between source and sample, re-assembling these fissures to create veneers of truth – where the effigies may have become more meaningful than the originals.

H.C : You work across a wide range of artistic mediums, including performance, installation, sculpture and video artworks. How do you approach the matching of concept and medium?

B.H : I think in general there is a leitmotif of permeability and transformation in my work and the materials are part of that, not just reflecting that concern but a process in it themselves. My first thought is always how best to articulate something through the work and therefore the medium is totally reliant on what I am exploring. Video is useful when dealing with time based concerns or recollections. For projects that were investigating spiritual aspects I projected the video onto metals so that the images were given this glowing materiality that was shifting, fleeting and enigmatic. When you project onto metals the image is never static and is experienced differently depending on where you position yourself, the projected surface absorbs the light and the image, holding it, but it also bounces it back around the space.

I think a love of materiality runs as a constant through my quite divergent work. I’m interested in how materiality can be utilised to convey the immaterial. I also like shifting the usual experience of a medium through materials – for example the projection onto floating metal panels that I mentioned makes the video installation much more sculptural as an encounter.

H.C : Your work often questions the symbiotic relationship that exists between an artwork and the viewer, or performance and the audience. Is it your aim to encourage participation, and elicit interaction, from those who encounter your artwork?

B.H : I think there needs to be a willing suspension of disbelief when viewing artworks and I like to position the works just on that line, the thin veil between belief and disbelief, truth and fiction, observation and participation. It is human to seek out states that elevate us out of the everyday. We all want to experience and believe. Some constructs offer us access to experiences at a safe enough distance, others offer the illusion of unity. In the moments of realisation the audience may become complicit in their continuing deception. It is about how long we wish to believe the lie in order to experience the effects on offer.

Interaction need not be a physical thing. All artworks are participatory and interactive on some level. Spectators are transcribers who can actively interpret and translate what they view with their own perceptions and distortions. Looking, as an action, even in the shortest aspect of gaze, is not passive, it is context based. The act of looking at an external object animates it in the mind.Our looking is dominant and active, rather than passive and we are implicated. 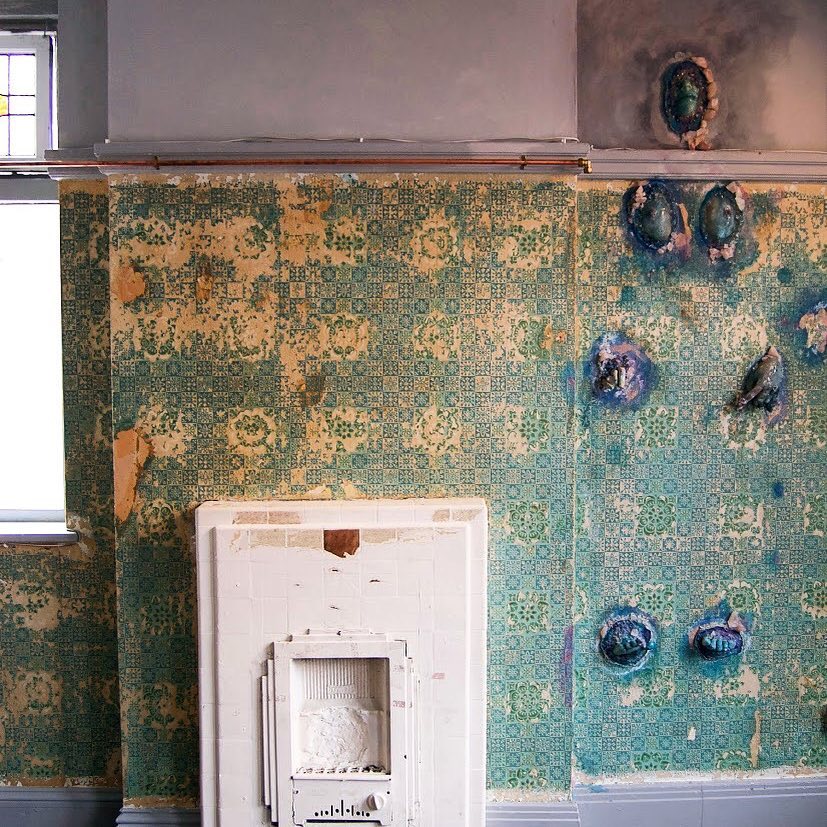 H.C : Collaboration plays an important part in your artistic output, and you regularly work with filmmakers, cinematographers, songwriters and composers. How do you approach artistic collaboration? Is it hard to rely on others to enact your artistic vision?

B.H : I do whatever’s best for the work and if I don’t have the skill set to articulate the work as it needs to inherently and intrinsically exist I will collaborate with someone who can bring these elements. Also collaboration is fun, I find working in isolation boring. I usually collaborate with people I know very well – current and ex partners and friends and it is a joy. Especially the ex boyfriend collaborations, there’s a feeling of wanting to make something perfect because the other life collaboration you worked on together didn’t go to plan. I’m not very good with keeping clear boundaries, and like to position myself in the middle, so collaboration with a partner is also just part of that aspect of my personality. It is always nice that you can look back on something beautiful if the relationship fails too.

I suppose in terms of how I approach collaboration, it is very organic usually. With what I would define as ‘my work’ (which is the work on my website and that I show in the whole) the idea originates with me, then there are parts of the production that are collaborative. The work usually becomes articulated and may live in ways I hadn’t anticipated and often its dissemination and distribution become collaborative also. There are usually satellite elements to the work, which exist in the ‘real’ (i.e. not art world) public domain.These are distributed in collaboration with members of the general public.

H.C : Finally, could you give us an insight into how you are approaching the Absinthe project, and what you are working on for the exhibition?

Various apparitions of mine will be made manifest at Spit and Sawdust during ‘Absinthe’. Lingering on the edges of the senses, the interrelated works are based around traces and intrusions in the space. I wanted to simultaneously haunt the space during the exhibition and become possessed in the process.

The first is a physical work previously I made a sculpture of a bronze hand emerging from an apparent fungal patch of wall and I wanted to expand on this and have a sort of figure emerging for this project. Hauntings for me are like realities that get stuck on a loop – something happens at a point and then time gets stuck on echo mode. This made me think about using a repetitive casting process to distort the figurative parts, which would be apparently emerging from a wall.

I also wanted to have other less obvious apparitions disrupting the general day to day running of the pub. I have two consumable works which will blend into the daily pub operations, a food item which will exist on the menu or as a special (an existing dish but given a strange twist by myself, which may or may not be noticed when it is consumed) as well as an Absinthe cocktail that will just be available within the cocktails that can be ordered.

The final element is a sound haunting. In the spirit of collaboration that ‘Absinthe’ seems to embody, I wanted one element of the works to be something that someone else took over and sound seemed ideal for this. So in effect someone would be possessing me, speaking through me and possessing the space – through a track. I’d met avant-garde saxophonist Ben Vince a few times and had played one of his music collaborations on my radio feature ‘The Monthly Howl’ on Soho Radio. I asked him to suggest a track of his that could exist in the day to day pub operations and jar with usual pub music. The track will haunt the space, coming on in the pub playlists and also being blasted out of unexpected places. He suggested ‘Flotation’ which is looping and beautiful and totally perfect.